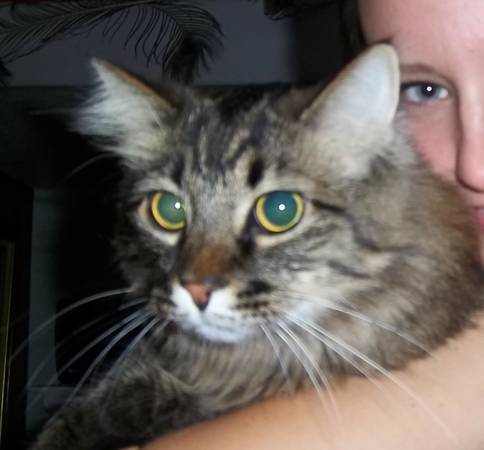 CHESTER WENT MISSING....from the Gold Ranch RV Park in Verdi NV which is right on the boarder of Nevada and California. The RV park caters to travelers passing through. Someone might have picked him up thinking he was a stray and given him a ride to "god only knows where", and he might have bolted out their door too, soooooo this is why I am posting to the towns that he might have arrived at. He is a male maincoonish looking with longhair. He has gold/yellow eyes sometimes even greenish, medium to dark fur on most of his backside and lighter brown on his belly and on his chest as well as under his bushy brown tail. He has the "M" on forehead. He has white just under his nose and on his chin which makes him look like he has white lips and white fur in his ears. He was wearing a collar when he disappeared with a white tag and a bell. He could have lost the collar by now but if he is still wearing it the # and info on the tag are incorrect but the correct # was hand written on the inside of the collar. He has an addiction to raw shrimp and will do a rear 2-paw dance for it and even paw your backside so you will give it to him. If you might have seen him or even spotted a kitty resembling him in your neighborhood, or in a shelter you were just at, or your neighbor or family member picked up a cat that looks like my Chester PLEASE.... CALL, TEX , or EMAIL ANY TIME DAY OR NIGHT. I am so heartbroken that my CHESTER is missing I won't stop looking for him. So any information is welcome..God Bless you and pray for all the lost kitty soles out there
SHERRIE
☎ 775-224-4231